What is an abdominal aortic aneurysm (AAA)? 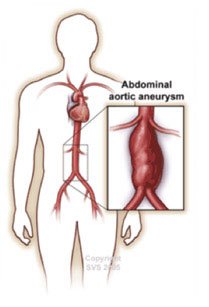 The aorta is the largest artery in the body, carrying blood away from the heart. The first part of the aorta is in the chest, known as the thoracic aorta. After crossing the diaphragm into your abdomen, it is called the abdominal aorta. The abdominal aorta supplies blood to the lower part of the body. At the level of the umbilicus (belly button), the aorta splits into two branches, called the iliac arteries, which travel through the pelvis into each groin, supplying blood to the legs.

A normal aorta is about 1 inch (or about 2 centimeters) in diameter. A weakness in the wall of the abdominal aorta may cause it to expand or bulge. This bulge in the aorta is called an abdominal aortic aneurysm (AAA). Similar to a balloon, the aorta can rupture if enough pressure from flow within the aorta causes it to stretch beyond its wall strength. A ruptured aneurysm can cause severe internal bleeding, which can lead to shock or even death.

Less commonly, AAA can cause another serious health problem called embolization. Clots or debris can form inside the aneurysm and travel to blood vessels leading to other organs in your body. If one of these blood vessels becomes blocked, it can cause severe pain or even more serious problems, such as limb loss.

How common are abdominal aortic aneurysms?

Approximately 200,000 people in the United States are diagnosed each year with an AAA. About ten percent of these meet criteria where the threat of death from rupture outweighs the risk of surgery. A ruptured AAA has a five percent survival rate while an electively repaired aneurysm has a 95% survival rate. This is because when diagnosed early before it causes symptoms, an AAA can be treated, or even cured, with highly effective and safe treatments.

What are the symptoms?

Most aortic aneurysms are diagnosed incidentally. In other words, when a patient is being evaluated for something else, an aneurysm is either identified on physical exam or an x-ray such as an ultrasound or CT scan. Therefore, most people with AAAs don’t have or feel any “symptoms”.

If one were to develop symptoms, one may experience one or more of the following:

A ruptured aneurysms is a life threatening medical emergency. One should seek medical attention immediately because time is critical for overall survival and avoidance of paralysis, renal failure or other major medical problems.

What causes an abdominal aortic aneurysm?

Multiple theories abound as to the cause of aneurysm formation. Some researchers believe that the aneurysm may be caused by inflammation in the aorta, which may cause its wall to weaken or break down. This inflammation can be associated with atherosclerosis (also called hardening of the arteries) or risk factors that contribute to atherosclerosis, such as high blood pressure (hypertension), hereditary factors and smoking. Atherosclerosis causes plaque formation which may lead to “hardening” or “stiffening” of the walls of the aorta, thus causing it to weaken and therefore expand. It is unclear why in some people the aorta expands and causes an aneurysm while in others the aorta narrows because of the plaque buildup, causing what is known as occlusive disease. In addition to atherosclerosis, other factors that can increase your risk of AAA include:

Your risk of developing AAA increases as you age. AAA is more common in men than in women.

What tests will I need?

As mentioned earlier, abdominal aortic aneurysms that are not causing symptoms are most often found when a physician is performing an imaging test for another condition. Sometimes your physician may feel a large pulsing mass in your abdomen on a routine physical examination. If an AAA is suspected, an imaging test should be performed to confirm the suspicion. The most common tests are an abdominal ultrasound, a computed tomography scan of the abdomen (CT scan) or a magnetic resonance imaging (MRI) of the abdomen.

How is an abdominal aortic aneurysm treated?

Conservative, medical management
Otherwise known as nonoperative or serial surveillance. If your AAA is small, your physician may recommend “watchful waiting,” which means that you should be monitored every 6-12 months for signs of changes in the aneurysm size. This is usually by means of an ultrasound or CT scan. An imaging study is necessary for an objective evaluation of the aorta because a physical exam can’t reliably ascertain the true size of the aneurysm.

In the past, surgery was considered for aneurysms that grew to 4.0 or 4.5 cm in greatest diameter. Recent literature has recommended that aneurysm repair can be delayed in most people unless the aorta expands to 5.0 or 5.5 cm in greatest diameter. Everyone is different and anyone with an AAA should seek the advice of a vascular specialist to help make an informed decision.

If you also have high blood pressure, your physician may prescribe blood pressure medication to lower the pressure on the weakened area of the aneurysm. If you smoke, you should obtain help to stop smoking. Coughing related to smoking or COPD also presents a risk factor for possible aneurysm rupture. Aneurysms do not “regress” or “go away”. The goal is to hope that it never expands to a size that poses a significant risk for rupture. Continued monitoring of the aneurysm is a crucial in aneurysm management.

Open Surgical aneurysm repair
A vascular surgeon may recommend that you have a surgical procedure called open aneurysm repair if your aneurysm is causing symptoms, or is larger than about 2 inches (roughly 5.0 to 5.5 centimeters), or is enlarging under observation. During an open aneurysm repair, also known as surgical aneurysm repair, your surgeon makes an incision in your abdomen and replaces the weakened part of your aorta with a tube-like replacement called an aortic graft. This graft is made of a strong, durable, man-made plastic material, such as Dacron®, in the size and shape of the healthy aorta. The strong tube takes the place of the weakened section in your aorta and allows your blood to pass easily through it. Following the surgery, you may stay in the hospital for 4 to 7 days. Depending upon your circumstances, you may also require 6 weeks to 3 months for a complete recovery. More than 90 percent of open aneurysm repairs are successful for the long term.

Endovascular stent graft
Instead of open aneurysm repair, your vascular surgeon may consider a newer procedure called an endovascular stent graft. Endovascular means that the treatment is performed inside your artery using long, thin tubes called catheters that are threaded through your blood vessels. This procedure is less invasive, meaning that your surgeon will usually need to make only small incisions in your groin area through which to thread the catheters. During the procedure, your surgeon will use live x-ray pictures viewed on a video screen to guide a fabric and metal tube, called an endovascular stent graft (or endograft), to the site of the aneurysm. Like the graft in open surgery, the endovascular stent graft also strengthens the aorta. Your recovery time for endovascular stent grafting is usually shorter than for the open surgery, and your hospital stay may be reduced to 2 to 3 days. However, this procedure requires more frequent follow-up visits with imaging procedures; usually CT scans, after endograft placement to be sure the graft continues to function properly. Also, the endograft is more likely to require periodic maintenance procedures than does the open procedure. In addition, your aneurysm may not have the shape that is suitable for this procedure, since not all patients are candidates for endovascular repair because of the extent of the aneurysm, or its relationship to the renal (kidney) arteries, or

"I found Dr. Luh and his staff to be very caring and professional. I would highly recommend EVLT to my family and friends. I had zero pain or discomfort."

"You have done wonders with veins in both legs. I am so pleased with the results. Besides being so professional, the staff are especially nice people."